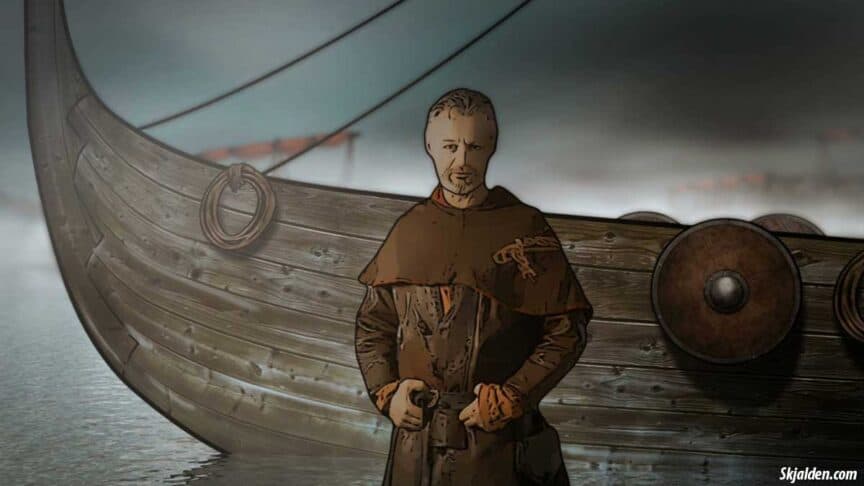 Today when many people think of the Vikings they often tend to think of them as being tall, dirty, and violent with horned helmets. But is that really how the Vikings looked in the Viking age, let’s take a look at this question.

There is a lot of different sources available from the Viking age to us, about their physical appearance, but the most important source is probably from excavations, where there has been found around 500 Viking skeletons in Denmark.

How tall were the Vikings?

People who had access to more or better food in the Viking age were often taller than the average person due to having a better lifestyle. The height of a Viking is often mentioned by the people they came in contact with. For instance, the Arab diplomat, Ibn Fadlan met the Rus people at Volga, which is today in modern-day Russia.

“I have seen the Rus as they came on their merchant journeys and encamped by the Volga. I have never seen more perfect physical specimens, tall as date palms, blonde and ruddy; they wear neither tunics nor caftans, but the men wear a garment which covers one side of the body and leaves a hand free.“

”Each man has an axe, a sword, and a knife and keeps each by him at all times. The swords are broad and grooved, of Frankish sort. From fingertips to their neck, each of them has a collection of trees, figures, and the like.” (Did the Vikings have tattoos?)

Other sources also mention the Vikings as having been tall, for instance in the East Frankish chronicles called Annals of Fulda. It mentions the appearance of the Vikings at a battle in 884, were the Franks defeated a Viking raid in Saxony.

English:In that battle, such men are said to have been killed among the Northmen as had never been seen before among the Frankish people, namely in their beauty and the size of their bodies.

Were the Vikings strong?

Vikings are often portrayed as being strong with big muscles, and that is actually not that far from the truth. The Vikings were more robust and muscular than the average person, and that was for both women and men. One of the reasons for this is, of course, the hard physical work, that was needed to survive in a landscape like Scandinavia in the Viking age.

In the Viking Age, the facial features of the men and women were more alike than they are today. The women had more prominent brow ridges which are typically a masculine feature, and the men had a more feminine face than today with a less prominent jaw and brow ridges.

Because of the facial features being more alike for men and women, it is sometimes difficult to decide if a Viking skeleton was a male or a female based on the skull alone.

In movies and series about the Vikings, we often see them portrayed with blond hair, which is not entirely accurate. Just like today, people have all kinds of hair color in society, but of course, some hair colors were more dominant in the Viking age.

If you think that the most dominant hair color in the Viking age was blonde hair then you are unfortunately wrong. There were, in fact, two dominant hair colors in the Viking society, blonde hair, and red hair. People with blonde hair were mostly located in northern Scandinavia, for instance, around Stockholm in Sweden, and people with red hair were mostly located in the western part of Scandinavia, for instance, in Denmark.

The men in the Viking age loved their hair and beard, in fact, they loved it so much they sometimes got their nickname after it. For instance, the famous Vikings Sweyn Forkbeard (In Danish: Svend Tveskæg) and Harald Fairhair both got their nickname because of it. Sweyn Forkbeard most likely got his nickname because his beard was divided in two, so it looked like a fork, and Harald Fairhair probably had a fine head of hair that earned him his nickname.

One of the most popular Danish hairstyles in the Viking age was a reverse mullet. A reverse mullet is when you have long hair in the front and short hair in the back of the head somewhat like Bjorn from the series Vikings had, I think it was in season 2.

The women also had beautiful hairstyles, and they often had long hair that was attractively styled, maybe with some beads or other accessories in their hair, if they could afford them.

The people in the Viking age were not robots coming off an assembling line, and by that I mean, not all of the Vikings had a long beard as the media often likes to portray them, they were all individuals with their own opinions and styles to express themselves, just like we do today.

So just because you have short hair and no beard does not mean you can’t be part of a Viking community. The amount of hair that grows on your head does not determine if you can be a Viking or not. I know it might be silly that I say this, but I think some people need to hear it.

Hygiene and beauty in the Viking age

We know from excavations and written sources that the Vikings took good care of themselves and had good hygiene. There have been found many beauty items such as combs, ear picks, and tweezers.

According to a Spanish Arab who visited Hedeby (In old Norse: Heiðabýr, in German: Haithabu) around the year 1000, both men and women wore make-up to look younger and more attractive.

Viking men had, in general, a lot of success with the local women in England, they looked great, were clean and smelled good. Unlike the English men, the Vikings took a bath every Saturday, which was more often than they did. Today the Danish word for Saturday “Lørdag” comes from the old Nordic word ”laugardagur”, which means washing day, so we can probably assume there is some truth to it. (Read more in the: Viking Lunar Calendar).

How long did the Vikings live?