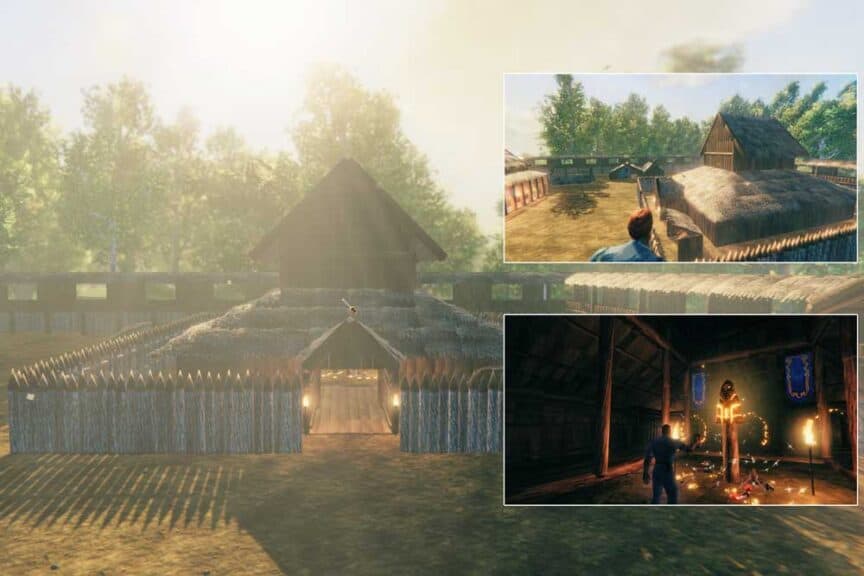 During the Viking Age, a local King and his kin lived at lake Tissø on the eastern coast of Zealand (Danish: Sjælland), in Denmark. The houses at the harbor were used for trade, and near the royal residence lived traveling craftsmen in small dugout houses, called pit-houses. These tiny houses functioned as temporary workplaces and homes.

It is the hall that was used as a place of sacrifice that we are going to take a look at. During a blót, which means “sacrifice”, the pillars and possibly also the walls would have been painted red with the blood of the sacrificed animals.

Food and other objects would have been placed in front pillars that were carved in the image of the gods. We know from excavations and the names of places that there were regional preferences of which Gods and Goddesses they preferred to worship.

Before I start, I just want to mention that because of the limitations of the game, and some choices I made, the hall is not an exact copy. It was used for inspiration, but the end result is similar.

The reason why I made the hall a bit wider was that I wanted to have enough space for the portals. I am still unsure if I wanted it to be taller, but for now, that is how it is.

I don’t know if there are any roof tiles that have a steeper angle in the game, but I would have loved to have another tile with a steeper angle for the roof. You don’t have to follow this build guide for Valheim to the letter, you can make the necessary modifications along the way to make the house look exactly to your liking.

During the build, I will also show you how I placed the roof, and what not to do, so you can avoid hearing that enjoyable sound that we all love to hear when the roof collapse. But even if you decide not to build it, I think it will still give you some inspiration of how a place of sacrifice looked during the Viking Age.

Notice that I didn’t call it a Viking temple, and that is because that word is a misconception. I have also called it that in the past, but we all get wiser with time, or so I hope. You can call it a house of worship, a place of sacrifice, a cult house, or a hoof (Blót = Sacrifice).

I like to call it a blót hall, I think it sounds cool, but nobody else calls it that, just try and google it. So if people like that word and begin using it, then I guess I just coined it. Else, just stick to the official words for it that I mentioned before.