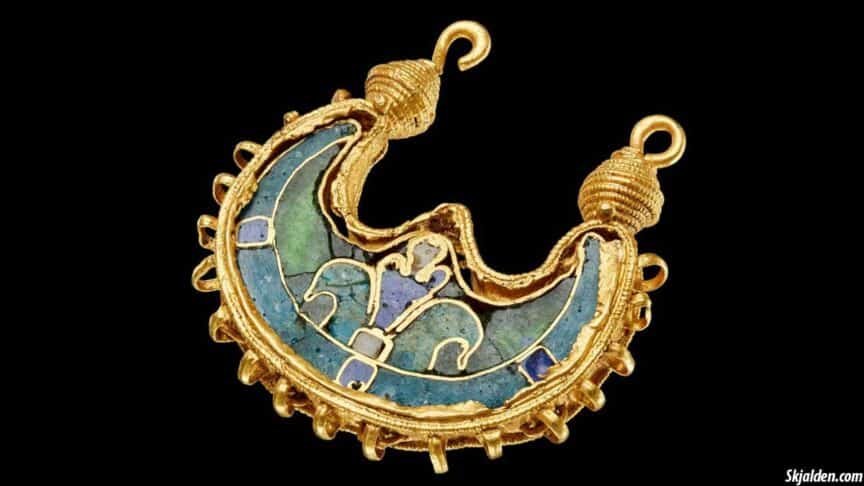 April 30, 2021, was a special day for Frants Fugl Vestergaard who made a discovery of a lifetime on a newly plowed field at Bøvling in the western part of Jutland, Denmark.

Frants was walking with his metal detector as he has done so many times before when he heard a small noise. Most people would probably have continued walking, but Frants was curious and picked up a small lump of earth and crushed it in his hand, and there it was, a small beautiful earring with enamel.

“At first I was shocked, and then I became humble. It’s like getting a text message that’s 1000 years old. -Frants”

According to Peter Pentz from the National Museum of Denmark, “this is quite an unusual gold earring. It is very unique to us, and we only know of 10-12 other copies in the whole world, and none of them have been found in Scandinavia before. The Vikings have brought home thousands of silver coins from their travels, but rarely art jewelry.”

“We had expected to find such a fine and invaluable piece of jewelry like this together with a large gold treasure or in a royal tomb but not on a random field in Bøvling. –Peter Pentz”

The earring consists of a crescent-shaped gold plate inserted in a frame made of gold threads adorned with small gold balls and gold ribbons. The crescent-shaped plate is covered with an enamel, which is created by a special technique where you crush glass and turn it into powder, and then melt it with metal so that it becomes opaque. The enamel has two birds around a tree or a plant which may symbolize the tree of life, Yggdrasil.

This type of jewelry is known especially from Egypt, Syria, Russia, and, of course, The Byzantine Empire. This style of craftsmanship is similar to an Arabic style, which originated in Egypt.

While this earring is unique, there have been found other pieces of jewelry crafted in this particular style. Queen Margaret of Denmark (1205-1212 CE), also known as Dagmar of Bohemia, wore a piece of jewelry called the Dagmar Cross.

The Dagmar Cross has Christian symbolism on both sides of the cross. This is a famous piece of jewelry, and, today, many Danish girls wear it for their confirmation into the Lutheran Church. The cross and the earring was probably not purchased, but it was most likely donated as a gift by kings or emperors.

One explanation of how this earring ended up on a field in Denmark is that Scandinavia had many highly skilled fighters during the Viking Age, and some of them worked as bodyguards for the Emperor of Byzantine.

These mercenaries were referred to as Varangian guards, and when their service ended, many of them would return back home along with all their obtained wealth. It is possible that one of these elite warriors received the earring as a personal gift by the emperor. The earring was probably originally part of a pair, but there has not been found a similar earring in the area.

This magnificent find in Denmark reminds us that there are still ancient treasures waiting to be discovered. I believe there are still many great finds hidden in our soil, at the bottom of the ocean, and in our lakes. I look forward to the next big discovery that will add another piece to the puzzle, and pull us a little bit closer to our ancestors.