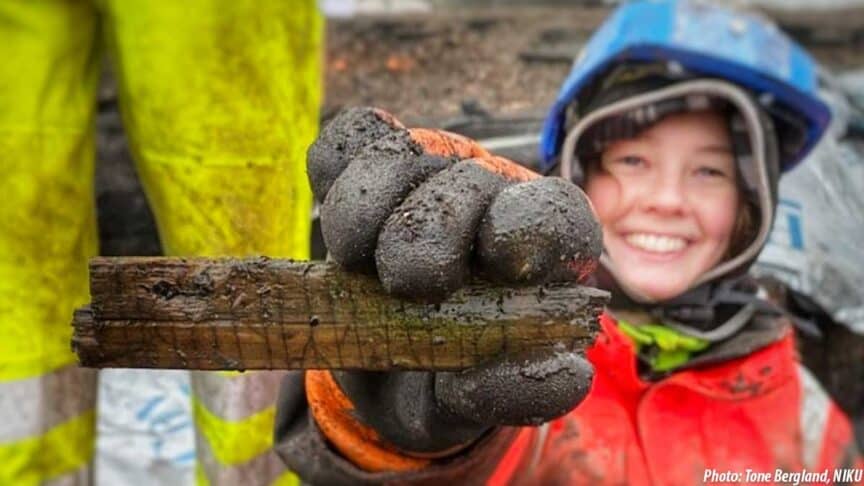 Just before Yule, the archaeologists Solveig Thorkildsen and Ingeborg Hornkjøl from the Norwegian Institute for Cultural Heritage Research (NIKU), found a rune bone and a rune stick a few days apart during the excavations in the Medieval Park in Oslo, Norway.

Solveig Thorkildsen found the rune bone. A large rib with an inscription on both sides. The rune bone is probably from a large domestic animal such as a horse or a cow. But the bone has to undergo several examinations before this can be established.

The rune stick was found by Ingeborg Hornkjøl. It lay in a deep ditch filled with water. According to Ingeborg, she picked it up because she thought it looked special.

This rune stick has an inscription on three sides, written in both Old Norse and Latin.

According to Kristel Zilmer who is a professor of the Norwegian Language, and Runology at the Museum of Cultural History at the University of Oslo. “These are two interesting discoveries that will expand our knowledge of the runic and written language that was used in medieval cities. The runic inscriptions that have been preserved are often short texts, which have some common statements and expressions that recur in several inscriptions.”

According to Kristel Zilmer, it is very difficult to read the inscriptions when they have been damaged. The runic characters can either be difficult to decipher, or they can seem to be linguistically meaningless. But we can extract a good deal of information from the inscriptions on the objects in the context of where they were found.

Old objects have often been damaged through time, and this rune stick has been damaged, and some of the runes have probably been lost. But, nevertheless, Kristel has managed to interpret several of the words.

On the broadside, there are two words in Latin that read as follows: manus and domine or domini. Manus means “hand” and dominus “lord, god”, and these words can be found in a well-known Latin prayer “In manus tuas, Domine, commendo spiritum meum”, which means, “in your hands, Lord, I give up my spirit”. These are the words of Jesus from when he was on the cross -Zilmer.

On the short side, there could be a continuation of the prayer. It is difficult to determine without a microscope, but it can still be read in several ways. It may say “it is true”. If that is the case, then this prayer is similar to an inscription in the Urnes Stave Church: “Hold the Holy Lord’s hand over Brynjolvs spirit. That’s true”.

The female name Bryngjerd is also mentioned, and perhaps this rune stick is about Bryngjerd having surrendered herself into the hands of God. Zilmer elaborates, many of the runic inscriptions from the Middle Ages contain simple religious quotes that expressed key messages in a Christian society.

According to Kristel Zilmer, the runes “basmarþærbæin” carved into the bone can have two different interpretations. It can be a name or a nickname of a person, or it can be a description of the bone itself. The last four runes “bæin” show at least that the word (Norwegian: bein”) which means bone in English was carved into it.

Kristel Zilmer believes that these finds in Oslo can teach us more about the medieval citizens of Oslo. Karen Langsholt Holmqvist, who is also from the Norwegian Institute for Cultural Heritage Research, comments that we know a lot about how the people in the Middle Ages thought, felt, and were interested in, thanks to the old sagas. The sagas were written in monasteries by people who were far more literate than the average person. The runes, on the other hand, were carved by a wider section of the population.

Zilmer explains that the inscriptions are from the Middle Ages. This can, for instance, be seen in the way the runic inscriptions have been carved. Now the question is whether or not this archaeological discovery can give us an exact dating of the objects.

It is possible that they date back to the same period as the figure that was discovered a few weeks earlier. This figure had a hairline that placed it in the 13th century. The figure was originally a handle on a knife, but unfortunately, the blade is missing.