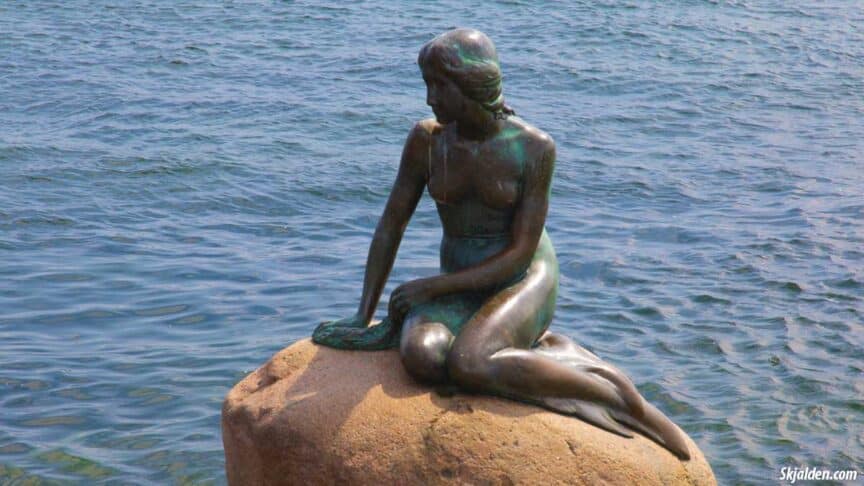 The little mermaid (Danish: Den lille Havfrue) is located at Langelinie in Copenhagen. The bronze statue was made by the sculptor Edvard Eriksen in 1909 after it had been commissioned by Carl Jacobsen, son of the founder of the brewery Carlsberg.

Quick facts about the little Mermaid

When to visit the iconic Mermaid statue

The best time to visit the little mermaid in Copenhagen is during the summer months, which in Denmark are June, July, August, and September.

It can be very crowded around the statue, so it can be difficult to take good pictures, you can avoid this if you come here during the early morning or late at night. No ticket is needed, the attraction is free, and open all day and night.

If you are going by public transport from the central station in Copenhagen to the little mermaid, then you can choose between bus, train, or the metro.

If you are planning on visiting many places in Copenhagen, or have difficulty walking, then the Hop-on Hop-off bus Tours could be a good idea. You pay for a ticket that will last the whole day, and then you can simply as the name says, jump on and off the tour busses when they stop at the attractions. If you want to stay at an attraction a little longer, then you can just wait for the next bus.

There is no public transportation available from the little mermaid to Nyhavn, you can either choose to walk or bike from Langelinie to Nyhavn or use the tour bus.

Don’t forget to check out the beautiful Gefion fountain at Langelinie park.