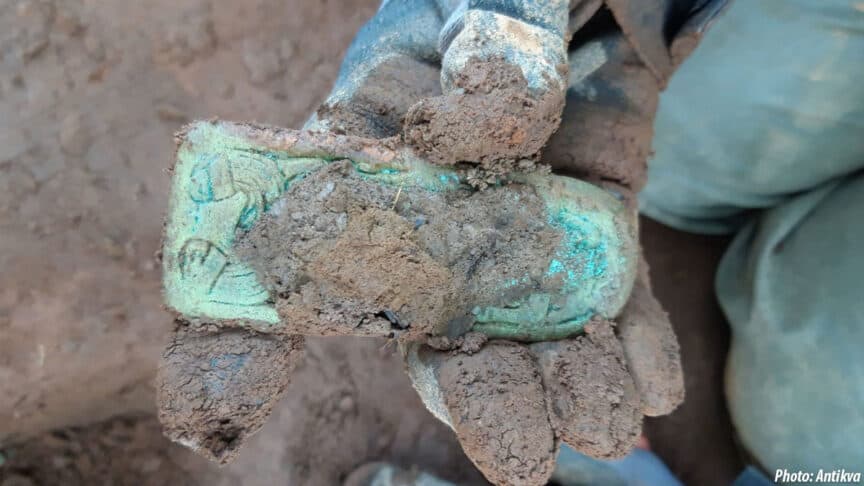 In 2021, four graves dating back to the settlement period of Iceland were found during archeological excavations on the farm Fjörður by Seyðisfjörður in eastern Iceland.

The findings were quite a surprise for the archeologists because they did not believe that there were older remains than from the 18th century in the area. But during their excavation, they noticed that a landslide dated to 1150 had sealed off parts of the area.

Those of you who have read my article about the sunstones will know that this farm is near the mine where the Icelanders mined for Icelandic spar. Some believe that these crystals were once used to navigate the sea, and there have through the years been conducted studies to conclude if this was the case or not. I won’t go into more details about it in this article, but you can read more about it in my research on the Viking sunstones.

So far four graves have been discovered, all of them dating back to the Viking Age. The graves contained well-preserved skeletons, a boat, two horses, a dog, weapons, and jewelry.

One of the graves was a boat grave where a man had been buried with a spear, a brooch, a silver ring, and a belt-buckle which was made in the Borre style. This is a Norse art style featuring symmetrical knot patterns often with an animal motif.

In addition, there were objects of iron and other small things, including beads. Beads were extremely popular, and they have often been found in graves and at important trading centers during the Viking Age. There was also a game piece from the game Hnefatafl, “also called Viking Chess”, a Nordic board game that was popular in the Iron Age and Viking Age.

According to Traustadóttir; Boat graves were more common in Norway, and of the nearly 400 graves examined in Iceland, only twelve are boat graves. As far as it can be ascertained, no boat graves have previously been found in the East Fjords, with the exception of a small boat found in a children’s grave at Straumur in Hróarstunga.

The individuals in two of the graves had been buried with a horse, and one of them had even gotten a dog as a companion for the afterlife. About half of the pre-Christian Icelandic graves contain horses, so this was a much more common tradition in Iceland than in Norway at the same time.

The fourth grave was a woman’s grave. She was buried with a pair of oval buckles and a pearl necklace consisting of 11 glass beads. In her leather purse, she had a Norwegian whetstone, flint, and probably a couple of other objects that had decayed long ago.

It was not normal to be buried with such beautiful and expensive grave gifts like these, and this clearly indicates that they were either very wealthy or had a high social status.

These graves are another important part of our history, and they will help us to understand who and why some people chose to cross the ocean to settle on Iceland. In most cases, it was a one-way trip with the shores of Norway never to be seen again.

We know from the Book of Settlements (Icelandic: Landnámabók), that Bjólfur from Voss in Norway was the first to settle in Seyðisfjörður, and he could have lived on the farm Fjörður which is only located about 100 meters away from the graves.

The Book of Settlements was not written down until 300 years after the events took place, but the stories are often correct, for example, the location of the different farms is quite precise, and there is no doubt that there has been a farm at this place since the settlement period.

The objects and skeletons have been sent to the National Museum of Iceland for further analysis, and who knows, maybe one of them was Bjólfur from Voss?

Iceland has had a lot of volcanic activity, which makes me wonder, what else has been sealed by landslides? Will, we one day find long-forgotten Viking settlements filled with archeological treasures? Only time will tell.