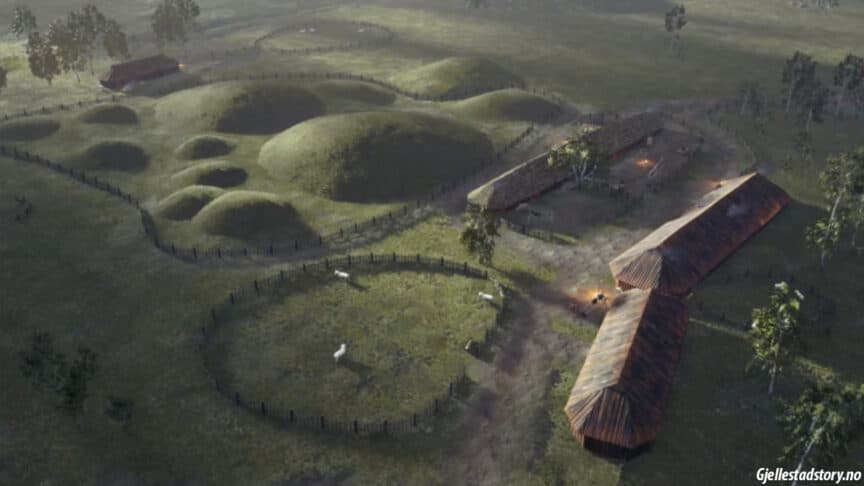 The Gjellestad ship was found with the use of ground-penetrating radar (GPR), a new technology that will most likely lead to a wealth of new discoveries.

These discoveries have now placed Gjellestad once and for all on the map as an area of great cultural importance. There can no longer be any doubt that this area has been a central place from the late Nordic Iron Age until it was abandoned for unknown reasons many centuries later.

Many questions come to mind when watching these ancient remains being dug up. Why was this place so important to our ancestors and what else is waiting to be discovered beneath the soil?

It is possible that this was a particularly good area for agriculture and animal husbandry. The area is relatively flat, and there are many rivers nearby. This settlement is also located close to Skagerrak which is the strait between Norway and Denmark. Easy access to the sea would probably also have meant that fish was probably a part of their daily diet.

The sea would also have given the people the opportunity to travel to and from nearby trade towns such as Kaupang or Aros. We also know that Skagerrak has been used by pirates for thousands of years to fill their pockets with riches from traveling merchants, and it is possible that these people preferred to gather their wealth with the use of the sword.

So far, there have been found the remains of five longhouses with the largest of them being almost 60 meters long and 15 meters wide. According to the archeologist Lars Gustavsen;

This longhouse was probably not used as living quarters or for animal husbandry, but rather used for religious, social, or political purposes. The longhouses were built over many hundreds of years, across many generations.

The oldest of the longhouses was built sometime in the early Iron Age, but it was not before the turn of the first century, around 1 CE, that the first small burial mounds were starting to be built, along with the second longhouse.

During the migration period, two additional longhouses were built along with a few more of the smaller burial mounds, and perhaps some of the bigger mounds were also built around the time period.

The fifth and largest of the longhouses was built during the Viking Age. The precise date has not been established yet, but it is estimated that it was built around 800 to 1030 CE. It is important to understand that every time a new longhouse was built, the old one was abandoned. It was easier just to build a new one, and scavenge the remaining good parts from the old house, and let’s also not forget that these houses were built over a time span of more than 1000 years.

The biggest of these burial mounds is Jellhaug which is approximately 80 meters in diameter and about 13 meters above ground level, making it the second-largest burial mound in Norway.

Even though this mound is massive in size, there has not been found any traces of a ship in the mound. In contrast to this big mound, the Gjellestad Viking ship was not even found in a mound, because it had been flattened by centuries of plowing.

While losing our heritage by farming is not something that I like to think about, it does show us that even though many of the burial mounds have been flattened through the years, there is still a chance of finding more ships.

The Viking ship was the first one to be discovered in Norway since 1904, but unfortunately, it was far from being in the same condition as the Oseberg ship. The Gjellestad ship was about 20 meters long and approximately five meters in width, which actually means that the two ships were very similar in size.

The Gjellestad Viking ship excavation was completed in 2021, but there are still large blocks of soil stored at the Museum of Cultural History in Oslo awaiting to be scanned for further findings. According to Christian Løchsen Rødsrud who is the project manager of the Gjellestad ship excavation; “We don’t have a full overview of what we´ve actually found, there might still be some surprises here”.

For instance, in the burial chamber, there were found more than 8000 fragments of various items, pieces of iron, and copper alloy. It will take years for archeologists to assemble all these pieces in order to make sense of what they have discovered. So this is definitely not the last time that we will hear about this excavation.

In my humble opinion there are five objects that I think, so far, are some of the best finds from the Gjellestad Viking ship excavation.

This unusually large amber bead with a hole in the middle may not sound too exciting, but decorative beads of this size are rarely found. We don’t why exactly it was placed in the grave, but it could have been a charm of protection to help safeguard the deceased for their journey in the afterlife.

My second choice would be another large bead, but it still has to be examined to determine what it could have been used for. According to Christian Løchsen Rødsrud, “it is either another large bead or a spindle whorl. Spindle whorls were used to weigh spindles when hand-spinning yarn. They have been made of many different materials, such as amber, bone, clay, stone, wood, and metal.”

Another great find is the bracelet or necklace with smaller beads in different colors. We know that one of the beads is made of amber, but the rest has yet to be established.

It is unclear as of this moment, but this could be a highly deteriorated chest. We have seen individuals being buried with a chest before, for instance, one was found at the excavation of the Oseberg ship. But this one is very deteriorated, and it is still unknown if it even is a chest and even if this should be the case, it’s difficult to see from the images how much can be preserved.

My last pick is not really an object, but it is just an imprint of a large ax. I think this imprint has a historical significance because it reminds us that the graves were rarely left alone.

If it was taken by some grave robbers who made a living by traveling around and digging up valuables, or if it was looted by another clan, is only something that we can speculate about today. But it is, unfortunately, a fact, that many graves have been disturbed in the past, and this imprint is clearly an indication of this.

One could argue that we are still disturbing the graves today when we are conducting these excavations, but I would have to disagree because they would eventually be destroyed by the elements, and if that is the case, then I would rather see them preserved at a local museum.

The latest GPR scans have also revealed that there are several more “plowed-out” burial mounds in the area, which can only mean that there has been a lot of human activity.

Gjellestad must have been a place of great importance, and one question that comes to mind is, how much is the Norwegian government willing to spend on future excavations in this area, and will new GPR scans reveal more stunning finds? Perhaps the remains of another longhouse or Viking ship?