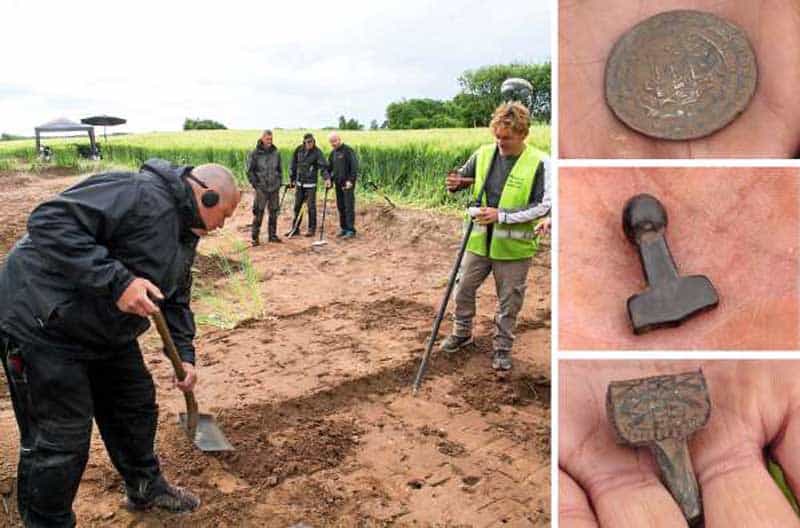 In the middle of February 2020, a Viking treasure was found on a field between Rødding and Vejby in Denmark. It was not found during a planned excavation, it was, as it has happened so often before, discovered by an amateur archaeologist from a metal detector club, in this case, “the golden horns” (Danish: Guldhornene).

The silver treasure weighs 1.4 kg and contains approximately 250 pieces of silver. Most of it is “hack silver” which are fragments of cut and bent silver, but there were also silver coins, silver bars, and a little Thor’s hammer pendant. I guess the smithies will soon be busy making a replica of this Viking jewelry for their shops.

Twenty of the silver coins are Arabic, often referred to as dirham. One of them has been dated to 906-907 CE and it was minted during the reign of the amir Isma’il ibn Ahmad (Arabic: اسماعیل بن احمد).

On the coin, is the name of Al-Muktafi, he was the caliph of the Abbasid Caliphate from 902 to 908. The coin was made in Tashkent, Uzbekistan, which is more than 5,000 km away from Scandinavia.

Imagine if you will, that some of these Arabic silver coins were used in trade for more than 100 years before they finally were dug down in the Danish soil.

The silver treasure did most likely belong to an earl (Danish: Jarl) or a successful merchant. But whoever it belonged to, never returned to reclaim it, I wonder if the person was drunk when it was buried, and then simply forgot about the exact location.

The researchers at the local museum have a theory that there could be more in the area to discover. A treasure like this would probably have been buried near someone’s home, and it is possible that there are some remains of a longhouse nearby.