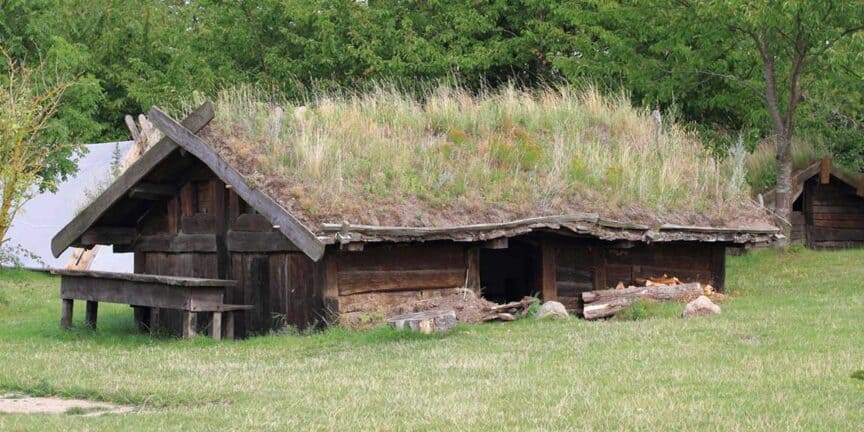 Have you ever wondered where the Vikings went for number two? Or maybe you haven’t really thought about it. With the luxury of the world today, we do not always think about how it used to be, especially a 1000 years ago.

In Denmark in the Municipality of Stevns, in the city of Strøby at the farm called Toftegård, there has been found a 1000-year-old toilet dating back to the Viking age. This toilet seems to have been in a small house or maybe an outhouse. By using the carbon 14 method on the feces, it shows that it dates back to the Viking Age, and therefore there is a big probability that this is the oldest toilet discovered in Denmark.

According to the Ph.D. student Anna S. Beck from the museum in southeast Denmark, this was a random discovery. She says, quote: We were looking for small houses called grubehuse, which are small workshop cabins, on the surface, it looked like them, but we soon figured out that it was something else.

We know of outhouses from the late Viking age and from the early middle ages, but not from villages or farms. People just thought that they used their feces as manure in the fields or just used the stable where they had their animals. The logic behind this is, that people in the cities just wanted to get rid of it, but in the country, it was a resource to grow their crops. So I got very surprised when the results from the samples came back.

There could be more of these discoveries to be uncovered in Denmark, but it could also be one of a kind discovery. According to Anna, the people in this community might have been inspired by the people in the Mediterranean, after an expedition, and built a version of it when they returned home.

According to Anna S. Beck, arkeologists could have overlooked finds like these in the past, because they didn’t think toilets existed outside the cities. In the results from analyzing the feces, they found traces of honey, which is something animals rarely eat, especially in the same spot for years. If the Vikings ate bread with honey or drank mead is unclear, but there was definitely pollen from honey in the soil.

The Vikings were not the only ones who loved honey, even the Danes today are still in love with their sweet honey, and lucky for the Danes they live in the country with the world’s best honey, at least according to a big beekeeping conference in Istanbul in Turkey last year. Personally, I always buy the Danish brand, not just because of its quality, but also because it is important to support your local farms, but I don’t brew mead nor do I put it on a piece of bread, I like it in my tea, taste much better than sugar.

Anyway back to the subject, it seems that this farm was not just an ordinary farm, but a big farm with a wealthy community and a community with high status. Their living quarters were a big hall 10 x 40 meters, and it seems that they have been living there for generations, because there were 4 other great halls close by, which dates further back. While this seems to have a community of high status, it was not on the level as Gammel Lejre.

As Anna says the Vikings did not pick their house from a catalog, which of course makes sense, and I would love to see what kind of gifts our soil has in store for us in the future. Just like there are variations in how the Vikings practiced their faith and which Gods and Goddesses were important to them, there also has to be some differences in their architecture.

Not all the arkeologists agree with Anna S. Beck, and she has generally met resistance to the idea. Some arkeologists think that the excrements could have been put in the hole by other means, and not necessarily have been a Viking toilet.

According to Anna the thought that excrements were used in the fields requires, that the people had a modern and rational ratio to their life. We know that In other cultures all over the world, the treatment of excrements has been complicated cultural, as well as social, rules, and taboos. By looking at the toilet culture we can learn a lot from their standards and rules within their society.

We know that people and animals lived together under the same roof for more than 1000 years in Scandinavia. But in the late Viking Age, the people and the animals started to distance themselves from each other. The people might have changed their habits and not just walked into the stable and sit among the animals. Since the excavation started in 1995, and only a third of the area 47.000 m2 of more than 160.000 m2 has been investigated, there might be more treasures from the past, laying in the soil ready to be discovered.