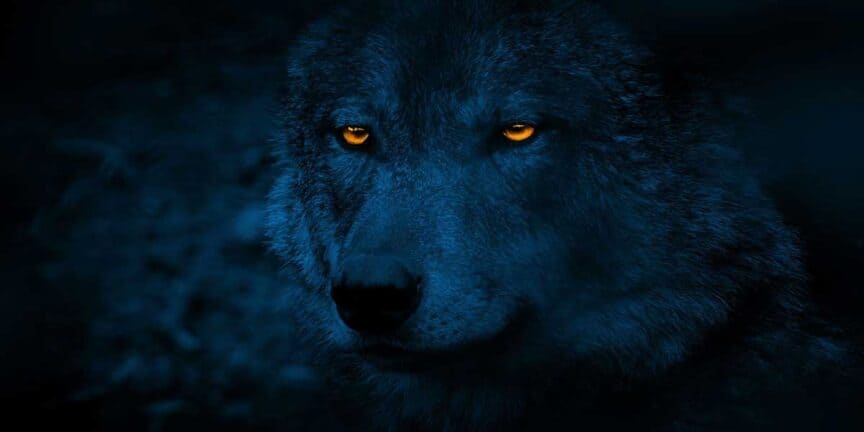 In 2010, wolves crossed the Danish border in the middle of the night. This would turn out to be the first time in nearly 200 years that a wolf had put its paws on the Danish soil.

In 2012, blurry images of what seem to be wolves taken from cell phones and surveillance cameras started to emerge and began to flood the news and the various social media platforms, the hunt was on, as if, it was some kind of loch ness monster.

People began to speculate about the possibility of wolves in Denmark, but there was still no concrete evidence for this.

In the following months of 2012, more people began to report that they had seen a wolf in northern Jutland, and one person claimed that he had even been standing face-to-face with it. These claims kept, of course, giving more nourishment to the rumors that one or more wolves had moved to Denmark.

Months went by, and in February 2013 a farmer found 10 dead sheep on one of his fields, and now the rumors slowly began to turn into reality.

In 2014, DNA samples taken from the dead sheep now proved that there where male wolves living in Denmark, however, there was still no evidence of she-wolves.

In 2015, the first she-wolf was spotted in one of the forests in Jutland, and the speculations about the possibility of wolf pups began to spread.

On the 30th of June, 2017, the first blurry image of what seem to be wolf pups was taken by a surveillance camera, south of the city of Holstebro in Jutland.

This was now seven years after the first tracks of a wolf was spotted in Denmark, and soon more images with small wolf pups began to emerge, these images were of all places taken near Ulfborg in Jutland (Danish: Jylland).

When I first heard this, I thought to myself, are you kidding me, the first wolves, that are born in Denmark in more than 200 years are born at the forest in Ulfborg, the name literally means the wolves keep.

Is this a coincidence or are the spirits of the forest trying to tell us something, and are these she-wolves carrying our pagan past in their wombs, and is this all happening for a reason.

During the summer more images and video recordings from surveillance cameras of the small wolf puppies, began to spread on social media.

What you might not have known, there has since the beginning, been a heated debate if the wolves should even be allowed to roam freely in Denmark, and this is a question that has split the Danish population right down the middle.

With one side arguing for the wolves to be allowed to be part of our nature, and the other side encouraging people to either poison them or hunt them down and kill them. The comments that were made were so disgusting, that I won’t repeat them, but you can read them yourself if you want.

I guess not everyone has the same rights to live here when they cross our borders in the shadows of the night.

Wolf hunted down and killed in Denmark

These threats, including tips and tricks on what to do, to stop the rise of the wolf population in Denmark was unfortunately not just something that was said on Facebook or among friends. A few people decided to act on it, and they took the law into their own hands.

On the 16th of April, a private video was shared on Facebook, that showed the killing of a wolf.

We have to remember that hunting down and killing wolves is illegal in Europe, the wolves are an endangered species and therefore also protected by law. The penalty for shooting a wolf in Denmark is punished with up to 2 years in prison.

If you ask me, people are hypocritical when they think they have the right to kill the wolves, and then point fingers at those who do the same to other endangered species such as lions or rhinos.

As of today, it is estimated that there are between 7 and 11 wolves in Denmark.

Wolf population is on the rise in Europe

The increasing numbers of wolves are not just something that is happening in Denmark, but it is actually a trend across the entire European continent.

Are Wolves Dangerous to People

The question we all should ask ourselves, should we have a diverse nature in Europe, or should we simply hunt down and kill any animal that is deemed a threat to our society.

It should not be a question of money, and the sheep farmers who have experienced an economic loss, by losing some of their livestock to wolves, can and should be compensated for their losses.

The wolves are part of our past, and if you ask me, they should be part of our future, and therefore the wolves have to be protected. The wolves did not just have a role in our history, but they also have their presence in our sagas across all the cultures in Europe.

Maybe we should draw the religious card, a card that seems to have an ever-increasing influence on our daily lives. Wolves do after all have an important role, especially in the ancient Nordic religion known today as Asatrú. In this old faith, one of the primary Gods is Odin and he has two wolves at his side, who are very important to him.

Are the wolves really as dangerous for our society as some people claim, or should we rather look at the return of the wolves as something that is positive? Do the wolves really not have the right to live in our countries and be part of this beautiful world?