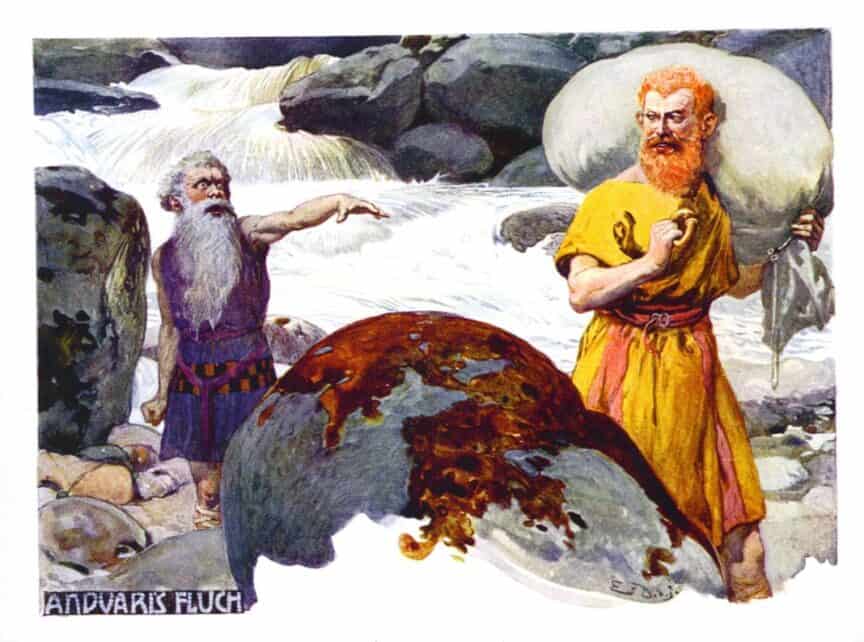 Andvari “Old Norse: careful one” is a dwarf who lives underneath a waterfall, he has some magical powers which he can use to turn himself into a pike, he uses this ability to swim in Andvarefos where he guards his treasures. He is also a skilled craftsman, and he used his knowledge to craft a magical ring which he called Andvaranaut, the ring helped him become a very wealthy dwarf.

One day Loki the trickster, tried to catch him with a giant fishing net that he had borrowed from the sea Goddess Ran. Loki finally succeeds in catching Andvari as he swam around as a Pike. Loki then took all the gold that Andvari was guarding, and in his greed, Loki even took the ring Andvaranaut of Andvari’s finger. While Loki was looking at the ring in his hand, Andvari managed to escape into the mountains, but not before he cast a great curse over the ring and his treasure. He who owns the entire treasure will die.

The ring Andvarenaut has the same amazing abilities as the ring Draupnir Odin’s ring. Every ninth day eight new golden rings will drop out of Andvarenaut, the eight new rings are of equal quality as Andvarenaut. But unlike Odin’s ring, this ring is cursed and will always cast a great curse on the owner, bring misery, bad luck, and make the owner unhappy.