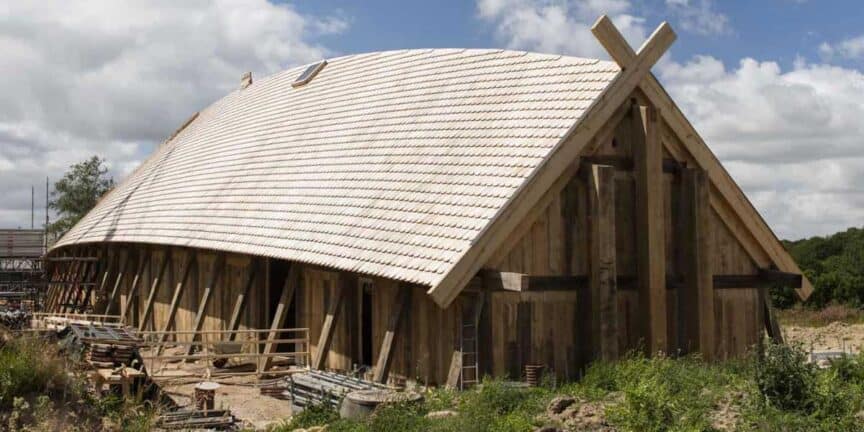 Archeology and excavations have seen a huge boom in the Kingdom of Denmark, and new evidence from the Viking age keeps coming into the light of day in these years. Over a period of several years, there have been conducted excavations at one of the highest points in Erritsø in the southwestern part of Denmark.

From the hills of Erritsø there is a great view over Little Belt (The sea between Jutland, and the island of Fyn). What is interesting about this spot is that there are only 35 km (21.74 miles) to the city of Jelling where Gorm the Old had his Viking fortress in the 10th century.

The discovery is actually a little bit of a sensation, not only was there discovered a huge Viking hall, but there are also remains of defense facilities with a moat.

During the years, and while the excavation took place, many theories went back and forth over the dinner table, about what this place was, but always with one question in mind, who lived here?

Was there a rival dynasty of Kings, that existed in Jutland during the 10th century, that challenged Gorm the old for power in the region? Or was there a war for power, and did Gorm the old defeat the rival clan in his pursuit for more power, and burn down their great halls?

We know based on the evidence, that the buildings were burned down, but if it was a rival clan or an accident was still something that needed to be sorted out. However, one thing that we did know for sure, whoever lived here, was a very powerful family.

As the years went by, and more evidence was placed on the table, our theories were brushed aside. The buildings were finally dated to around 1300 years ago, about 200 years before the reign of Gorm the old. However, that did not make it less interesting, and Erritsø could still be placed on the same scale as the town Lejre.

The great hall at Erritsø was 40 meters long, 10 meters tall, and 13 meters wide. In recent times there have been some speculations of why the halls were so tall, and one of the theories is that the King might have sat on a floor above his guests and looked down on them. Not in a way to feel superior, but maybe to observe them.

It was very important that he treated the people in his clan with respect, and held feasts during the year where they could come and eat and drink as much as they wanted. He also had to give them gifts, these could possibly have been personal gifts, and things they had wished for, or maybe things that he had heard they needed in their household.

If a King failed to deliver on these feasts and gifts for his clansmen, his head could in the worst case end up on top of a spike, and the next one in line would simply just take over, this could be another family in the clan.

The remains of the longhouses that have been found around the area of the fortress have been dated to different time periods within the Viking age. This clearly indicates that people have lived here for a long time, and that the area was extremely important.

The Viking fortress was protected by a moat of 110 meters on all four sides. The moat was V-shaped, 1-3 meters wide, and 1-2 meters deep. Two Meters behind the moat was a palisade, which may have been 3 meters tall.

Next to the hall was a smaller structure that was fenced off, similar to the one found at Tissø on Zealand (Danish: Sjælland). This smaller building is believed by some to have been a place of worship to the pagan gods.

On the other side of the moat, were four wells and three other buildings, which may have been barns, workshops, and stables.

The big hall within the fortress could have been a hall of great importance, and a place where powerful people in charge sat around the fire to discuss matters at hand.

It was at a time where only the language of the sword was spoken, and peace was more the exception than it was the norm. It was the strongest that ruled the lands, and the strongest was the one with the most warriors at his disposal.

It would have taken a powerful family to build a great hall like this, which means that this area was either ruled by a King or a Jarl.

The fortress stood in the area of what is believed to have been a small society of approximately 1,000 people, who worked in small houses called gruppehuse, scattered throughout the nearby landscape.

This is a perfect location to have a strategically placed control post to observe an incoming army or fleet. An analysis that was conducted in 2016, also confirms that the area had no significant tree growth, and large parts of the area are believed to have been mainly wetlands, which made it easy to defend.

This fortress is also located on top of a hill, where guards could have seen hostile ships at a great distance. The areas on this map that is green, is where it was possible for someone at a height of 1.80cm to see hostiles from the fortress. Seeing for that many kilometers would have given them enough time to prepare or warn of an incoming attack.

If they were in need of reinforcements, then they could have lit a fire on the hill called a “Bavnehøj”. If you have seen Lord of the rings, and how they lit a fire on the mountains to signal for help, that is how it would have looked like. These Bavnehøje have been found at various locations in Denmark.

The location called Herslev, was probably where the army was stationed, and it would have been easy to see the signal fire from there. The place called Kongsted, literally translated into English means “The Kings Place”, so that is self-explanatory.

The place called Snekkermade is believed to have been where they crafted their ships, these ships were then most likely sailed down on the lake to where it is believed they had their harbor at Gudsø Vig.

The lake could also have been used as a shortcut to send reinforcements north or south before the enemy would arrive.

The enemies would not have been able to enter the harbor or use the lake, because they were often filled with mines. Not the ones that exploded, but these mines were pillars and other wooden objects that would stop ships from advancing if they did not know where it was safe to sail.

The areas with the word mark, where probably places of agriculture, the word mark is the Danish word for field.

Erritsø and the surrounding area have had a strategic significance in Danish history, and it has often been used with that purpose in wars. For instance, during the Schleswig wars, the Danes retreated to the city of Fredericia and used it as a strategic defense. Evidence of these wars is still clearly visible in the form of moats that twist themselves like a snake through and around the city of Fredericia.

Why, or how this fortress at Erritsø was destroyed is only something that we can speculate about today, but it could have fallen victim to the Franks who were out for pagan blood in Jutland.

According to the Frankish royal annals from 815, the Danish king, Harald Klak, who for some reason was a king without owning a single piece of land, had traveled south to meet with Emperor.

Harald Klak promised the Emperor that if he gave him an army to conquer land in Jutland and let him be king. He would convert to Christianity and be nice towards the Franks.

His arguments must have been convincing because the Emperor gave him an army to go and “punish” the sons of King Godfred.

The army consisted of Obotrites and Saxons, and they traveled north for seven days and plundered and took slaves along the eastern coast. According to the Frankish records, they came to a place where there were just a few miles to an island, where they could see the sons of Godfred hiding with a fleet of 200 ships.

This could indicate that it was at the place called Little Belt (Danish: Lillebælt) where the fortress of Erritsø was located. Since the Franks were on foot, they had no means to challenge the sons. So they probably just attacked the fortress and burned it to the ground.

After Harald Klak’s failed attempt at grabbing the throne for himself, the army returned back to Saxony again.

Excavations are still in the process of being conducted in Erritsø, and only time will tell the full story about this fortress, and its importance in the area.