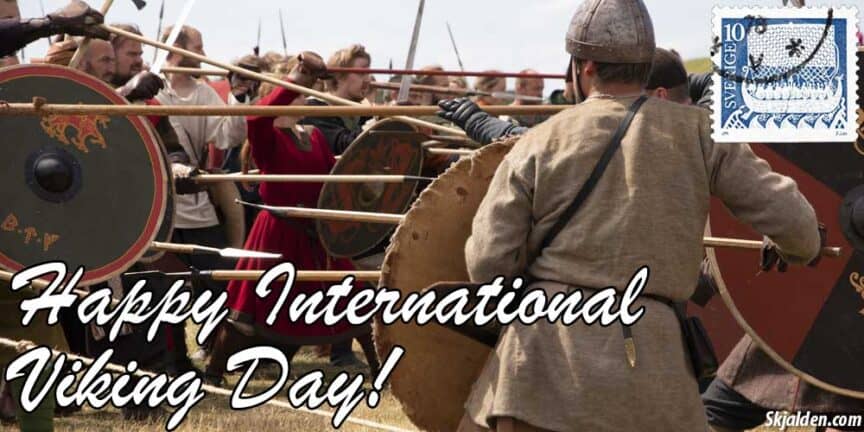 It seems that every year, on May 8, images with the text Happy International Viking day are shared across all of the social media platforms. But what is the origin of this day? and how was it started?

The international Viking day was started by the Organisation Destination Viking in 2013, in order to spread awareness of our Viking heritage. Destination Viking works together with partners from 16 countries in Europe, which has stated that its main goal is to develop a borderless tourism destination, focusing on the Viking world.

Below is a press release that was released by the Oresund Event Center in connection with the first international Viking day.

Press release, May 2013, The Vikings are coming!

For the first time ever, are Danish and Swedish Viking attractions joining forces to conduct activities with the purpose of attracting more visitors. The first of these joint events is called “Vikingefejden 2013”.

The Americans are fascinated by them. The Chinese want to buy them. The Germans want to play like them. The English want to fight against them, in short, the Vikings are the latest hit.

In the Øresund region, there are a lot of Viking experiences and attractions, but so far there has not been much cooperation across the strait, and the tourist potential has not been adequately fulfilled. However, a new groundbreaking collaboration will change that.

The Oresund Event Center has for the first time gathered Viking attractions on both sides of the strait in a joint marketing project called the Vikings are coming! The idea is that together we are stronger in the competition to attract more regional and international cultural tourists to our region. East Danish Tourism, Wonderful Copenhagen, Skåne Culture, and the tourist organizations in Trelleborg and Vellinge are also supporting the initiative.

The secretary of the Oresund Event Center, Ulrich Ammundsen, has said, quote: “With the Vikings coming! A milestone has been created in the collaboration between the Danish and Swedish Viking attractions. Our common Danish-Scanian history binds us together, and therefore it is only natural that we work together to develop and promote an authentic tourist experience such as Viking experiences.”

Under the slogan, The Viking are coming! Have the attractions put together an impressive summer program with Viking experiences for the whole family.

1000 years ago, the Vikings in all probability considered May 8 as the day when it was time to jump out of the bed, and polish the sword, and get the ships ready to visit friends and enemies from near and far. The sun was again high in the sky, and it aroused the desire to feel the sun of the south again. The bees began to produce honey for the life-giving mead and the children ran barefoot around in the growing grass.

The organization Destination Viking, therefore, calls for making this day solemn, as in international Viking day – now and for all time to come. Bring the day to life by celebrating like a real Viking – beat your weapons against the shields, raise the banner and let the mead flow, go out with like-minded people, and spread the good news that the Viking are here again.

Vikingefejden 2013: Is an event with big ambitions

Ax throwing, deadly fights, and ear tearing battle cries are on the program when the Vikingefejden event is being celebrated during the summer of 2013. The battle is between four proud Viking teams from Denmark and Sweden, and it will be a battle that will take endurance, ingenuity, tactics, and raw strength when the Vikings compete against each other in eight different Old Norse disciplines.

The audience can look forward to watching authentic Viking battles, while they cheer on their favorite competitor, and they can even try some of these ancient Viking games themself. It will also be possible to buy Viking food during the celebration.

The tournament will take place over four weekends – first on May 25th at the Viking Fortress Trelleborg in Slagelse, then on June 1st at the Frederikssund Vikingespil, then on August 17th at Trelleborg in Skåne, and finally the final battle on August 25 at the Foteviken Viking museum in Sweden.

You can also visit four large Viking markets during the summer, or experience the spectacular Viking play with action and love (this was a theatrical performance).

It is now that the Vikings are coming!

How to celebrate international Viking day

There are many ways that you can celebrate international Viking day. You support a local Viking museum by going there for a visit. If you have already been to your local one, then why not pick one that you haven’t been to? You can also get buy some mead from your local brewery.

If you live outside of Europe, then you could celebrate May 8 by getting together with some friends and having a good time, but should the day fall on mothers’ day then you better spend the day with her, and treasure her as long as you can.

May 8, is also a good day to start saving some of your hard-earned silver for a future visit to Scandinavia. There are many interesting and fun Viking activities during the summer months across the North, for instance, the Viking festivals. Dusty and boring museums are at many places a thing of the past, museums have become a lot more interactive and fun.

I would like to encourage Viking communities throughout the world to organize an international Viking day every May 8, so we can keep this day going. Sharing our heritage across the world will keep our culture alive, and it will spread awareness of our Viking heritage.

I would also like to remind everyone to support your local museum and a Viking market, especially in these times, they need all the support that you can give them.

You can find a list of upcoming Viking markets and events on Skjalden.com, and there is also a growing list of Viking attractions in Scandinavia. These attractions include statues, museums, runestones, ancient stone ship burial monuments, and much much more, will add more to the list when I can.