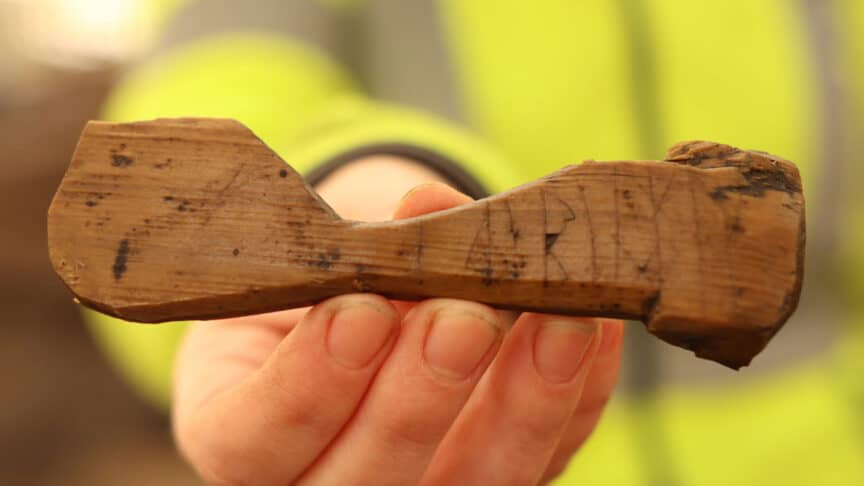 Another interesting piece of wood with runic inscriptions has been found at the Medieval Park in Oslo. It was found in the same layer as the knife handle in the shape of a king with a falcon, which could suggest that this piece of wood is from around 1200 CE. It was also at this location that a large bone and a stick with runic inscriptions were found during the excavations in December 2021.

According to the archaeologists, this new discovery seems to be a medieval name-tag carved by a guy named Asbjørn who lived about 800 years ago. The piece of wood is approximately 11.4 centimeters long, and it has eight runes inscribed on it, which says: (Ásbjǫrn á mik), translation: “Asbjørn owns me”.

Asbjørn was a common name in Norway and Denmark during the Middle Ages and the Viking Age, and it is still in use to this day. The name itself is a combination of the Norse words for God (Áss) and bear (bjørn).

According to the runologist Kristel Zilmer, these name tags, or as she calls them, medieval ownership markers, are a common type of middle age inscriptions. They usually contain a name, as well as the verb ‘owns”. Sometimes we also get to know what was owned.

In Norway, name tags like these have mostly been found in Trondheim and Bergen, where they have found more than 100 of them. In Oslo, this new name tag is one of few.

What was this piece of wood used for?

My imagination is always running at full speed when looking at some of the findings, and I wonder what it was used for. Could it have been attached to something? Perhaps on a box that had some valuable goods that were going to be traded at one of the stalls at the local market?

But how did it end up on the ground? Was it simply worn off from the many years of trade, or was it perhaps broken off by some local thief before he snuck off with the goods in the shadows of the night? We will never know.

But I think these name tags are quite funny because it just shows us that we are not that different from our ancestors, we are just more technologically advanced, and I guess our descendants will think the same about us in the centuries ahead.

The excavations have also revealed a piece of the broad medieval Oslo street, and as you can see on the image the street looks to be in pretty good condition, which is a promising sign of future discoveries in this area.

Old cities like Oslo have a lot of history hidden beneath the soil, which is often only revealed when new construction projects are started. Most of these findings are fragile, and I am often very surprised how they even managed to escape the clutches of time, but somehow they did.